This is Volkswagen Group SWOT analysis. For more information on how to do a SWOT analysis please refer to our article.

Volkswagen AG (further Volkswagen) is the world’s leading automotive manufacturer based in Wolfsburg, Germany. The company is producing over 10 million vehicles annually and often shares 1-2 place with Toyota Motor Corporation.

Volkswagen has the widest brand and product portfolio among all automotive companies. Volkswagen is the leading automaker in Europe, where all its brands are based. The largest company’s market is China.

The company has been involved in “dieselgate” scandal, which shook the company and the whole automotive industry and resulted in seriously damaged brand reputation, enormous fines and lost sales.

You can find more information about the business in Volkswagen Groups’ official website or Wikipedia’s article.

1. The widest brand portfolio among all automotive companies

Volkswagen’s brand portfolio is the largest among all automotive companies. The company sells its vehicles under 12 different brands.[1]

No other Volkswagen’s rival has so many brands under its management. General Motors, which is the 3rd largest automaker in the world, only has 10 different brands and Toyota currently sells its vehicles only under 4 different brands.

In the wake of their emission scandal and the external market pressures Volkswagen has introduced a new strategy plan that will focus on delivering key goals by 2025. The company’s key objectives are:

Volkswagen’s further objectives outlined in the plan are to increase company’s efficiency and profitability. The new strategy will focus company’s efforts on some of the most important areas and will provide a clear direction, which is something many automotive companies lack right now.

Volkswagen’s revenue is much more spread across different brands, types of products and geographic areas than its rivals’ revenues.

Moreover, Volkswagen offers many types of automotive and maritime products and financial services, which further diversify company’s sources of income.

Only 74.5% of Volkswagen’s income come from the main ‘Passengers Cars’ segment.[1] ‘Commercial Vehicles’, ‘Power Engineering’ and ‘Financial Services’ generate the rest 12.4%, 1.9% and 11.2% of the revenue, accordingly.

No single market generates over 20% of Volkswagen’s revenue, which is by far the best geographically diversified income among all automotive companies.

Synergy between the brands is one of the key Volkswagen’s strengths. Many of Volkswagen’s brands, including Škoda, SEAT and Volkswagen, or Bugatti, Lamborghini and Porsche, share their R&D spending, build technology, access to different markets and customer knowledge to increase sales and decrease costs. At the same time, they are able to cater for different consumer groups.

Synergy would not be possible between only a few brands.

China is the world’s largest automotive market share and the largest Volkswagen’s market in terms of the number of vehicles sold. Volkswagen operates in China through two joint ventures: SAIC Volkswagen and FAW-Volkswagen.

Through both partnerships, the company offers over 150 different models for the market and sells over 3.5 million units a year. This allows Volkswagen to capture 14.6% market share and to become the second largest automaker in China behind General Motors.

By establishing itself in China, Volkswagen will be able to compete in the world’s largest automotive market better.

Volkswagen receives a lot of criticism and negative publicity for the following things:

Negative publicity has hit hard Volkswagen Group. The company’s sales declined in 2015 and will likely decline in 2016. The company experience billions of losses, many current and potential customers. Company’s brand image has been severely affected and it will take lots of time to recover it.

Negative publicity is one of the worst weaknesses Volkswagen has brought upon itself.

2. The highest recall rate in the U.S. market

Volkswagen’s massed produced vehicles have the highest recall rate in the U.S. market among all the automakers. A study published by iSeeCars.com has revealed that Volkswagen Group has a recall rate of 1805 vehicles per 1000 vehicles produced.[3] 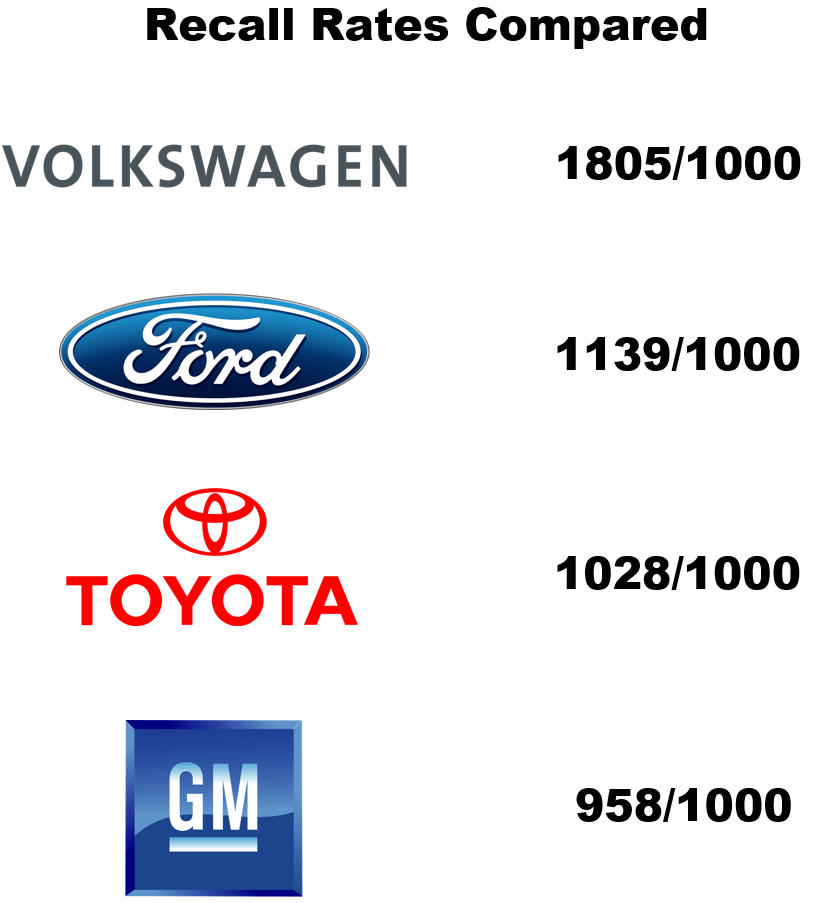 This means that Volkswagen Group has recalled each of its vehicle nearly twice. A high recall rate results in additional costs, disappointed customers and negative publicity.

At the moment Volkswagen’s share in the U.S. automotive market is at best weak. The company sold less than 850,000 thousand vehicles in the U.S. and captured less than 5% market share, despite being the largest automaker in the world.

1. Fuel prices are expected to rise in the near future

Fuel prices have been low for the last few years and are expected to rise in the near future due to the changes in the supply. Low fuel prices have increased the demand for large vehicles such as pickup trucks and SUVs. Many companies, including General Motors, Ford, Chrysler have benefited from the low fuel prices, because of their strong SUVs and pickup trucks offerings.

On the other hand, Volkswagen didn’t invest much into growing its line of light trucks and has opted to compete in the smaller vehicle range. The demand for small vehicles always rises when the fuel prices are high.

Volkswagen could also push its plans to introduce the first competitive electric vehicle earlier than 2020 and benefit for the growing demand for them.

2. Acquire skills and competences through acquisitions

In order to fulfill its goals outlined in the new strategy plan, Volkswagen will have to develop new competence in battery technology, digitalization and autonomous driving.

The fastest and least costly way to do that is by acquiring smaller startups, which have already developed the skills and the technology needed for Volkswagen. Usually, acquisitions are costly, but the current interest rates are the lowest in history, so capital can be acquired cheaply.

Currently, nearly 33 companies are working on autonomous vehicles.[4] Few of them, including Google, Ford and Tesla, are testing their autonomous vehicles on the roads and none of them are selling these cars to the general public. It is hard to estimate the exact demand or the market value (it is expected to be worth US$45 billion by 2025) for the autonomous vehicles, but according to the efforts of all the major automakers, it seems that autonomous vehicles is the next ‘big thing’ for the industry.

Volkswagen’s reputation as the environmentally friendly company has been severely damaged by its emissions scandal. The company is no longer trusted as the business, which protects the environment and is concerned about the communities around it.

The company identifies this as the key damage done by its emission issue.

If Volkswagen wants to regain the trust of its stakeholders, the company should increase its efforts in sustainability significantly.

Volkswagen is faced with an ever increased competition from the traditional automotive companies, the new players and saturation of its main markets.

In China, one of the key company’s markets, new home based Chinese manufacturers are competing by offering lower prices, but similar quality build vehicles.

New companies, such as Tesla with its electric cars will make it very hard for Volkswagen to compete in the electric cars segment. In addition, Google, which tries to build self-driving cars is also threatening the traditional automotive industry. The competition is further fueled by the fact that the global automotive production capacity far exceeds the demand. In 2015, there was an estimated global excess production capacity of 31 million units.[5]

2. Further fines and damages that will have to be paid

Volkswagen’s emission scandal has already resulted in damaged brand reputation, lost consumer confidence and €16.2 billion in damages and fines.[1] This, though, is not the end of it.

The company is still involved in many lawsuits all over the world, which seek to convict Volkswagen for cheating on their emission data. The company will have to pay billions in additional fines and damages, decreasing its profits for the next few years.

Many governments around the world are committed to reducing the greenhouse gas emissions and are encouraging fuel efficiency initiatives. There is always a risk that such environmental initiatives may increase production costs for the car manufacturers and that these costs won’t be able to be recouped in such a highly competitive and price-sensitive market.