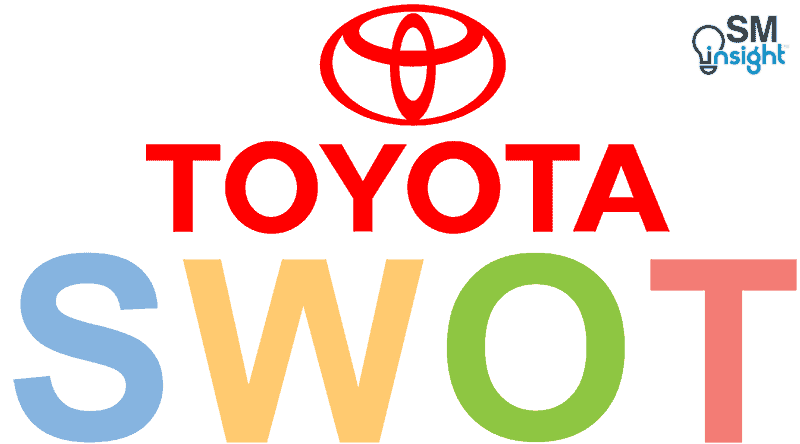 This Toyota SWOT analysis reveals how one of the most innovative automotive companies used its competitive advantages to become the dominant player in the automotive industry.

It identifies all the key strengths, weaknesses, opportunities and threats that affect the company the most. If you want to find out more about the SWOT of Toyota, you’re in the right place.

For more information on how to do a SWOT analysis please refer to our article.

Toyota Motor Corporation (further Toyota) is the world’s leading automaker (often tied with Volkswagen for 1st-2nd place) based in Toyota City, Japan. In 2012, the company was the first automotive company to produce over 10 million vehicles in a single year.

The company operates 4 different brands: Daihatsu, Hino, Lexus and Toyota. Toyota’s brand is the world’s 7th most valuable brand in the world and the most valuable automotive brand, worth US$50.291 billion.

The main Toyota’s markets are Japan, United States and China, where the company sells over 50% of its vehicles. The company produces the best-selling hybrid vehicle Prius.

You can find more information about the business in Toyota’s official website or Wikipedia’s article.

1. Strong focus on research and development (R&D) leading to some of the most innovative vehicles in the world

Toyota is famous for its innovative culture. The company’s goal on being ahead of its competition by introducing some of the most innovative vehicles in the market has proven to be a successful strategy.

The company operates one of the largest research facility network among the automotive companies to achieve the best possible results from its R&D expenditure. In total, 15 research facilities in 8 different countries, including Japan, United States, China, Thailand, Australia, Germany, France and Belgium, focus on 3 key R&D areas:[1]

Figure 1. Toyota’s and its competitors R&D spending (US$ billions)

Among the automotive companies, only Volkswagen spends more on R&D than Toyota. Nonetheless, Toyota uses its R&D budget the most effectively, spending just 3.6% of its total revenue on R&D, while Volkswagen spends 6.7%.

This means that Toyota needs to spend less on R&D to generate the same amount of revenue than its key rivals.

Huge, efficient R&D spending has allowed Toyota to gain a competitive advantage over its competitors and to become one of the largest automotive manufacturers in the world by researching and introducing the leading-edge technology and vehicles to the consumers.

2. The most valuable and one of the most recognizable automotive brands in the world

Toyota Motor Corporation was incorporated in 1937 and since then, has become one of the most recognizable brands in the world.

Brand value is closely related to brand reputation and recognition. Toyota, which produced and sold 8.964 million vehicles in 190 countries in 2018 alone, has one of the widest consumer reach in the world.

Manufacturing, research and sales operations worldwide, combined with a huge number or vehicles sold, as well as advertising spending has helped the company to create one of the most recognizable brands in the world. Brand recognition helps the company to introduce new products to the market more easily and with fewer costs.

Toyota brand is also one of the most reputable brands in the automotive industry. Over its 75 years’ history, the company received hundreds of awards accolades in vehicle design, safety, environment-friendliness and manufacturing operations.[7]

In 2018 alone, the company has received 7 IIHS (Insurance Institute for Highway Safety) Top Safety Picks 2018 awards (more than any other automotive company) for its Toyota Corolla, Prius, Camry, Avalon, Highlander and RAV4 vehicle models as well as 4 other Top Safety awards for Lexus models.[8]

The company received more 2017 J.D. Power Vehicle Dependability Awards than any other brand.[9] In addition to the awards for its vehicles, the company ranks the 2nd on the Carbon Clean 200 List, which ranks the companies according to their efforts to transition to clean energy.[10]

Toyota’s brand and recognition provides the company with a competitive edge over competitors as few other automotive brands are so well-known and reputable.

Why buy from us?

Best source We’re the No.1 source for both free and paid SWOT analyses on the web.
Well researched All the information is supported with data from the most trusted sources.
Instant Access You can download your swot instantly after the payment.
Trusted Many customers often contact us with requests for custom business/market specific SWOTs, because they trust us.