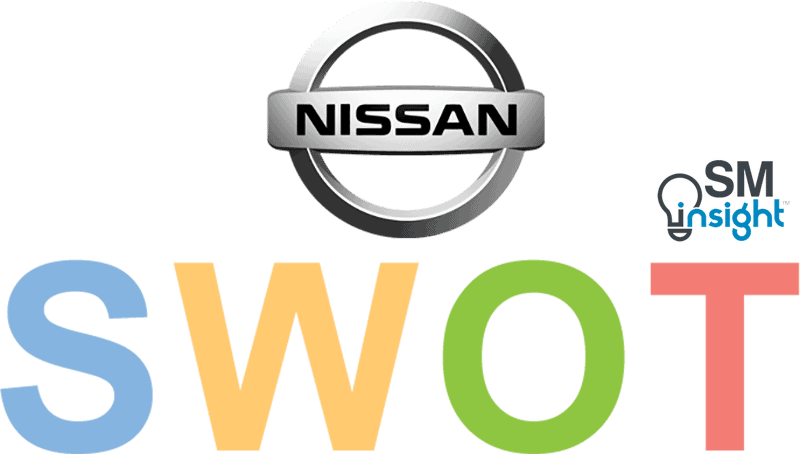 This is Nissan Motor Company Ltd SWOT analysis. For more information on how to do a SWOT analysis please refer to our article.

Nissan Motor Company Ltd is an automotive manufacturer from Nishi-ku, Japan. The company was founded by Yoshisuke Aikawa in 1934. Nissan struggled to established itself as a global automotive leader and formed a Renault-Nissan alliance in 1999. In 2015 alone, Nissan sold just 5.4 million units worldwide, while the whole alliance sold 8.4 million units combined. This allowed the alliance to capture 10% worldwide market share and become the 4th largest vehicle manufacturer as a group, in the world.

Renault-Nissan alliance has created synergies that wouldn’t exist otherwise. The group has captured 10% global automotive sales and sold more than 8.5 million cars and other vehicles.

2. Focused R&D spending resulting into the best-selling electric vehicle in the world

Nissan has spent ¥531.9 billion of Japanese yen or US$4.42 billion for R&D in 2015. While this is not the largest amount of money spent for R&D between the automotive companies, it is very well focused by Nissan to a few areas, especially electric vehicles (EV).

Focused R&D spending has allowed the company to produce the best-selling electric vehicle Leaf. In 2015, the company has sold 200,000 units of Leaf and is the leading automotive brand in the EV segment. EV market is expected to grow significantly in the future and Nissan already has an advantage in it.

3. Strong presence in the leading and emerging automotive markets

Nissan through its alliance with Renault and various acquisitions have increased its market share in the global automotive market. The company successfully competes in the U.S. and grows its market share in China, Mexico, Russia, Brazil and other emerging markets.

Growing presence in the emerging markets, will allow the company to strengthen its brand and competitive positions in these markets.

Carlos Ghosn, Nissan’s CEO, has been managing the company since 1999. His management style and reforms inside the ailing Nissan company, have been featured in many business cases. He successfully turned around the company’s operations and returned the company to growth.

Nissan could improve its marketing and advertising capabilities. The company has spent ¥342.2 billion Japanese yen or US$2.85 billion for advertising in 2015. This is more than what Hyundai, Honda or Audi has spent, yet, the company gained little or no in brand presence for the money spent. No major brand rating agency has included Nissan brand between the world’s top 5 automotive brands or the world’s top 100 largest brands, proving that the company has poor advertising and marketing skills.

2. Massive product recalls in the U.S.

The U.S. is the largest Nissan’s market and product recalls seriously damage the company’s brand and sales in the country. In 2015, the company issued recalls for 930,000 Nissan Altima’s models[4] and 768,000 various SUVs and crossovers models. In 2016, the company has recalled 3.53 million various cars’ models over safety bag issues. Every automotive company is affected by product recalls to some extent. Nonetheless, Nissan’s massive recalls are some of the biggest and, unfortunately, concentrated in one market, thus, damaging the company’s brand significantly.

Many governments around the world are committed to reducing the greenhouse gas emissions and are encouraging fuel efficiency initiatives. Such environmental initiatives may increase production costs for the car manufacturers and these costs will be either passed to price sensitive consumers or will decrease the company’s profits. Nissan may take advantage of this by introducing more car models running only on electricity and bypassing all the government regulations associated with the greenhouse gas emissions.

Signs of an improving economy and rising consumer confidence have been reflected in the strongest increase in new vehicle sales for more than a decade in the U.S. market. 17.5 million new units were sold in 2015, a 5.7% increase over 2014. Interest rates in the U.S. have been low for several years and are forecast to remain that way for the foreseeable future. In such economic conditions, Nissan has an opportunity to capture the higher market share and increase its sales in the U.S. automotive market.

The market share of the automotive companies is significantly impacted by the timing and frequency of new model releases. Historically, new models have tended to have major upgrades every 4 or 5 years with only minor modifications in between. However, due to the rising consumer expectations in relation to in-car technology and the competitive nature of the industry, there is an argument to release upgraded models more frequently. Nissan is well-positioned to be able to do this.

Nissan is faced with an ever increased competition from the traditional automotive companies and the new players. In China, one of the key company’s markets, new home based Chinese manufacturers are competing by offering lower prices and the similar features. Nissan’s international rivals, such as Toyota, Ford, General Motors and Volkswagen, all have bigger budgets and higher brand recognition and could easily expand in China, U.S. and Europe’s markets by taking the market share from Nissan.

New companies, such as Tesla with its electric cars is competing directly against Nissan’s Leaf. In addition, Google, which tries to build self-driving cars are also threatening the traditional automotive industry. The competition is further fueled by the fact that the global automotive production capacity far exceeds the demand. In 2015, there was an estimated global excess production capacity of 31 million units.[6]

More than 50% of Nissan’s revenue come from the international markets, which means that the company has to convert foreign currencies to Japanese Yen in order to calculate its revenues and send profits back to Japan. Currency rates are volatile and company’s profits and revenue highly depend on the fluctuating exchange rates. The company cannot control currency exchange rates, therefore it is at risk, if Japanese Yen exchange rates would start to rise. In this case, the company’s profits would decrease significantly.

Nissan has manufacturing facilities in Japan, Thailand, China and Indonesia. These countries, including others, are often subject to natural disasters that disrupt manufacturing processes and result in lower production volumes and profits.

Currently, fuel prices are the lowest in a decade. Such situation has encouraged consumers to buy big fuel-inefficient vehicles such as SUVs and pickup trucks. The company has its own SUVs and pickup truck lines, but suffers from the decreasing consumer demand for Nissan Leaf cars.

The trend of low fuel prices is likely to stay and Nissan may suffer from investing huge amounts of R&D into electric vehicles, for which the demand may significantly decrease.