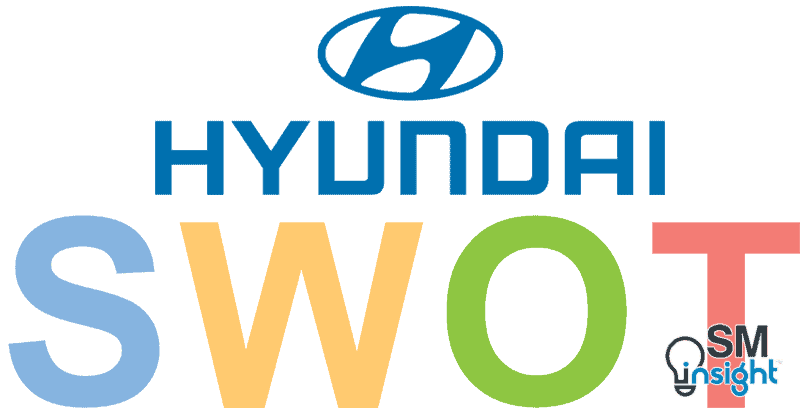 This is Hyundai Motor Company SWOT analysis. For more information on how to do a SWOT analysis please refer to our article.

Hyundai Motor Company is an automotive manufacturer from Seoul South Korea. The company was established in 1967 by founder Chung Ju-yung as a construction company. Over the years the company went major restructurings and is now a part of many companies bearing ‘Hyundai’ name. Hyundai Motor group designs, manufactures and sells light vehicles, commercial vehicles and buses. It is the world’s 5th largest automaker, which sold 3.89 million units through 6000 dealerships in 186 countries in 2021.[2]

The company controls 32.8% of Kia Motors and along with other subsidiaries, forms Hyundai Motor Group company. According to Interbrand, Hyundai brand is the world’s 35th worth US$12.5 billion. The company’s cars are considered one of the safest in the industry and has been granted multiple safety awards.

1. Excellence in vehicle safety and design proven by many awards

Hyundai is considered to be one of the safest car brands in the world. The company has made significant improvements to the cars safety features and has been awarded the following safety awards:

These safety awards are only for 2015-2016 safety ratings. The company has received more than 30 safety awards over the last 6 years.[3]

In addition to Hyundai’s efforts to improve its cars’ safety features, the company also stepped up in its design efforts. In 2015, Hyundai’s Sonata, Genesis, Elantra, i20 and Tucson models have been acknowledged as the best in design, earning Red Dot Design, Good Design and Product Design Awards. In total, the company has earned more than 20 design awards over the last 6 years.[3]

2. The 6th most reputable automotive brand in the world

According to Interbrand, Hyundai’s brand is the 6th highest rated automotive brand in the world, behind Toyota, Mercedes-Benz, BMW, Honda, Ford and Volkswagen. The company has evaluated the brand at US$12.5 billion just behind Ford’s brand. [4]

Hyundai has spent KRW￦ 2.712 trillion or USD$1.847 billion on R&D in 2015. While it’s far from the largest amount spent on R&D in the industry, the money is spent very effectively by Hyundai. The company has been able to introduce a few models (Ioniq and Sonata) that are capable of running on electricity only. Sonata’s plug-in hybrid engine has been awarded as one of the top 10 in 2015 and is actually capable of running on only electricity farther than Toyota’s Prius.

Yet, the major company’s achievement is in hydrogen fuel cells technology. Hyundai is the first company to mass produce its Tucson vehicles running only on fuel cells.[5] The company is also planning to introduce a new generation fuel cell car in 2018, which brings the company ahead of competition in the field.[6]

Hyundai cars are well-made. The company provides 5 year guarantee for any new car sold, which is one of the longest and best covered guarantees in the industry. The company is able to offer such guarantee because Hyundai produces quality cars.

Hyundai’s cars have been awarded by numerous rewards as ‘the best cars money can buy’ and ‘the best residual value’ cars.[3] This means that Hyundai vehicles do not depreciate as much in value as other cars and can be resold for the higher prices.

China is the largest Hyundai’s market, where the company has 8.9% market share. It is also the fast growing vehicle market, which is set to become the most important market to compete in, in the future. Therefore, having strong positions in the China’s vehicle markets is important as it builds brands presence and loyal customer base.

Currently, Hyundai is losing market share in China, because of its pricier SUVs. The company is battling this by introducing new SUVs in 2017, which will be cheaper and more affordable to price conscious Chinese consumer. Strong Hyundai presence in China creates strong opportunities for the future growth.

Hyundai is among the top 5 largest auto manufacturers, but has one of the poorest brand portfolios. The company sells only Hyundai and Kia brands, while Volkswagen sells 12 different brands, General Motors 9, Chrysler 8, Toyota 4 different brands. Only Ford sells the same 2 different brands as Hyundai. Fewer brands lead to fewer customer segments that can be satisfied and as a result, the company’s earnings suffer.[8]

The U.S. market is the leading vehicle market in the world with 21.5 million units sold in 2015 alone. The market has plenty of opportunities for such high profit vehicles as pickup trucks, electric and fuel cell vehicles. Yet, Hyundai wasn’t even among the top 5 car manufacturers and sold less than 10% of the market units.[8]

Hyundai’s revenue has been increasing over the last 3 years, yet at the same time, company’s profit has significantly declined, highlighting poor management of the company’s operations.

The decline of the company’s profit margin has resulted because of the inefficient company’s management and poor top management’s decisions.

Over the last few years, Hyundai has issued vast product recalls. In 2015, Hyundai recalled 470,000 Sonata’s to fix engine problems and an additional 305,000 vehicles to fix braking light problems. In 2016, the company has already recalled more than 170,000 vehicles in the U.S. alone. The company has also recalled more than half a million vehicles in 2014. A high number of recalls damages consumer trust of the company’s brand and adds to negative publicity. Both result in lower revenue and operating profits.

Signs of an improving economy and rising consumer confidence have been reflected in the strongest increase in new vehicle sales for more than a decade in the U.S. market. 17.5 million new units were sold in 2015, a 5.7% increase over 2014. Interest rates in the U.S. have been low for several years and are forecast to remain that way for the foreseeable future. Hyundai has an opportunity to capture the higher market share and increase sales in such economic conditions.

The market share of automotive companies is significantly impacted by the timing and frequency of new model releases. Historically, the new models have tended to have major upgrades every 4 or 5 years, with only minor modifications in between. However, due to rising consumer expectations in relation to in-car technology and the competitive nature of the industry, there is an argument to release the upgraded models more frequently. Hyundai is well-positioned to be able to do this, with its current focus on R&D. The key will be its ability to cost effectively implement technology initiatives in order to maximize a competitive advantage.

Currently, fuel prices are the lowest in a decade. This situation has encouraged consumers to buy big fuel-inefficient vehicles such as SUVs and pickup trucks. Hyundai, which relies mainly on the line of sedan cars, is at disadvantage in low fuel situation. The company has its own SUVs, which are smaller than traditional SUVs and has no pickup truck lines, which currently drive the automotive companies’ growth in the U.S.

The trend of low fuel prices is likely to stay and Hyundai could introduce wider range of SUVs or even consider introducing a line of pickup trucks.

Hyundai is faced with an ever increased competition from the traditional automotive companies and the new players. In China, the main company’s market, new home based Chinese manufacturers are competing by offering lower prices and similar features. Hyundai’s international rivals, such as Toyota, Ford, General Motors and Volkswagen, all have aggressively expanded in China, the U.S. and Europe’s markets.

New companies, such as Tesla with its electric cars, or even Google, which tries to build self-driving cars are also threatening the traditional automotive industry. The competition is further fueled by the fact that the global automotive production capacity far exceeds the demand. In 2015, there was an estimated global excess production capacity of 31 million units.[7]

More than 50% of Hyundai’s revenue come from international markets, which means that the company’s profits and revenue highly depend on the exchange rates. Currency exchange rates are often volatile and depend on many factors, which Hyundai cannot control. Korean Won exchange rate has been increasing against other currencies in 2016 and may increase significantly over the next few years. This scenario would result in lower revenue and profits for Hyundai.

Many governments around the world are committed to reducing the greenhouse gas emissions and are encouraging fuel efficiency initiatives. There is always a risk that such environmental initiatives may increase production costs for the car manufacturers and that these costs won’t be able to be recouped in such a highly competitive and price-sensitive market.