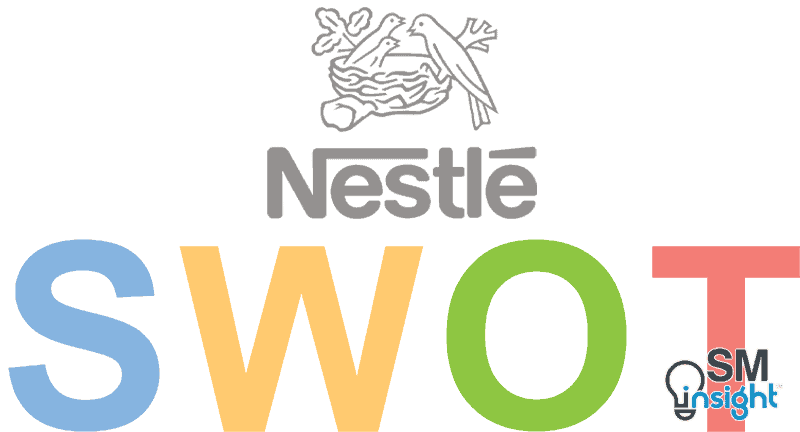 This is Nestle S.A. SWOT analysis. For more information on how to do a SWOT analysis please refer to our article.

Nestlé S.A. is the world’s leading nutrition, health and wellness company based in Switzerland. It is the largest food and beverage company in the world measured by revenue generating CHF88.785 billion or US$89.772 billion in 2015 alone.[1]

It owns several major consumer brands such as Nescafé, Nestea, Nestle, Purina, KitKat and Vittel, including many other prominent brands.

According to Nestlé, one of its key competitive advantages is research and development (R&D) capabilities.[1] The company spent CHF1.678 billion or US$1.697 billion on R&D in 2015. This accounted for 1.89% of the total revenue. In comparison, The Coca Cola Company spent 0% of its revenue on R&D and PepsiCo, Nestlé’s chief rival, spent only 1.2% or just US$754 million of its revenue on R&D.

Figure 1. R&D spending by the largest food and beverage companies (in US$ billions)

Nestlé’s R&D capabilities also stem from its R&D network. The company has the largest R&D centers’ network of any food or beverage company in the world, with 34 R&D facilities and over 5000 people working in them.

Nestlé’s superiority in R&D against its rivals provides a sustainable competitive advantage and long-term success.

2. Strong geographic presence, with one of the best geographically diversified revenue sources

Nestlé operates and sells its products in 189 countries, reaching almost the entire world. The company has divided its operating segments into 3 geographic areas: The Americas (AMS), Europe, Middle East and North Africa (EMENA) and Asia, Oceania and sub-Saharan Africa (AOA). None of the regions earn over 50% of the total revenue.

In comparison, PepsiCo and The Coca Cola Company earn 56% and 46% of their revenue from the U.S. alone, respectively.[2] This proves that Nestlé’s strong and diverse geographic presence, gives it a competitive advantage over its rivals, especially when the U.S. market is negatively affected.

Nestlé’s product portfolio is wider than any of its rivals in the industry. The company offers over 2000 different product choices in 7 main categories:[3]

Wide product portfolio allows Nestlé to better satisfy various consumers’ needs and target wider consumer segment. The company is also less affected by the changing consumer tastes or consumer backlash against one of its brands.

Nestlé prides itself on company’s sustainability efforts. The company’s environmental initiatives have helped to reduce waste, packaging material usage and to keep the environment cleaner.

Since 1991, the company has saved 500 million kg of packaging material by redesigning its packages. Nestlé uses recycled materials and chooses materials from renewable source whenever possible.

By 2016, 105 of Nestlé’s factories have reached zero waste in production, one of the best results in the industry.

Few of the company’s rivals could match the company’s efforts in sustainability, which result in lower production costs, cleaner environment and happier communities.

5. Ownership of some of the most recognizable brands in the world

Being the largest food company in the world attracts lots of attention. Most of that attention is criticism over the companies’ practices and Nestlé is no exception to that.

Over the years, the company has been criticized for a number of its practices:

The latest criticism is over the company’s uncontrolled water usage in California, where prolonged drought is hurting the state. California state has experienced water shortages over the last few years and many restrictions have been placed on businesses and residents to reduce their water consumption. On the other hand, Nestlé, which drains the water from aquifers in reservations’ areas, isn’t controlled by state laws and does not have to restrict its water usage.[6] Nestlé’s inability to address the communities’ needs and problems in California, but instead increasing the problems even more, draws lots of criticism.

Nestlé is a huge food company selling tens of thousands of different food products daily. Even with strict quality control measures the company often has to recall its products in various markets due to some form of contamination. In 2014, Nestlé recalled and destroyed 37,000 tons of contaminated Maggi noodles in India. This resulted in hundreds of millions in lost sales and damaged brand reputation. Recently, the company had to recall various prepared dishes in the U.S., which may have contained pieces of glass. The company has to recall some of its products almost monthly. Such negative publicity heavily affects Nestlé’s business.

1. Clear and accurate labelling indicating of any harmful products

According to the study done by Delloitte,[7] consumers are more likely to buy products that are clearly and accurately labeled. Almost 62% consumers are more likely to choose products that are free of any harmful products. 51% of the surveyed said that their decisions will be influenced by clear and accurate labelling and 47% would like to see clearly displayed information.

Nestlé, which has a history of providing misleading nutritional information on its labels should improve its practices and clearly label the products and include all the necessary information in addition to nutritional values.

Consumers are becoming more and more conscious of where the food came from and how it was grown or made. Many young consumers are placing sustainability as an important decision making factor when buying their food. Social responsibility of buying ethically grown, sustainable foods is often more important that price.

Nestlé could start sourcing all of its materials from sustainably grown plantations and farms.

There is a growing number of food startups that are looking for ways on how to disrupt the food industry. According to CB Insights,[8] food startups raised nearly US$5.5 billion in 2015, indicating a significant support for the food startups. These new startups are developing the next generation foods and drinks, provide various solutions on food delivery, new meal kits, specialty foods and introduce new ways to grow and sell the food.

In the current situation, where the established brands are losing sales and the capital is still very cheap, Nestlé could increase its investments in startups that will help the company to meet the future challenges and increase the sales.

According to the Beverage Marketing Corporation Report,[9] RTD coffees is the fastest growing liquid beverage sector in the U.S. for the last 3 years. While the whole beverage industry grew only slightly, RTD coffees grew by a staggering 37%. Healthy beverages, such as RTD teas were also growing over 4% annually.

Even though Nestlé is one of the biggest coffee sellers in the world, the company doesn’t have any significant brands in RTD coffee or RTD tea markets. The are many smaller brands that could be acquired in the industry or the company could push its own RTD brands to the U.S. market to take the advantage of the growing RTD sectors.

1. Poor quality water and its scarcity

Beverages, make over 25% of the total Nestlé’s sales and water is used in all of their production. Bottled water products alone generate 8% of the total company’s revenue.

Water is scarce and is becoming even more scarce due to the factors such as climate change, growing populations, overexploitation of resources, the increasing demand for food products, increasing pollution and the poor management of waste water. Demand for water is increasing, and it will likely become more difficult for Nestlé to access both clean and inexpensive supplies of drinking water, resulting in potentially increased production costs and therefore lower profitability.

The company also currently receives lots of criticism and negative publicity over its high use of drinking water near the communities suffering from droughts. In the future, water scarcity will likely become a more significant problem that will negatively impact company’s operations.

2. Increased competition in the beverage and food industries

According to Nestlé, competitive rivalry is one of the key threats affecting the company. The beverage and food industries are highly competitive and consist of numerous small, large and multinational companies. Beverage, food and snack products compete primarily on the basis of brand recognition, taste, price, quality, product variety, distribution, advertising, packaging, convenience, service, marketing and promotional activity, as well as the ability to anticipate and respond to consumer trends.[1]

Food and beverage markets are growing very slowly and with so many new startups, Nestlé will find it hard to compete in the future.

3. The price of coffee beans could significantly rise due to major weather disasters

Coffee generates over 10% of the company’s total sales and coffee beans are the major raw material used in its production. Therefore, Nestlé’s profit margins are dependent, to some extent, on the price of coffee beans, which over the past several years has been very volatile.

The major reasons for such price volatility are droughts, unusually high or low temperatures and many other weather disasters in Brazil and other coffee-growing countries. In addition to those factors, growing demand has increased competition for the best quality coffee beans and has pushed the prices up significantly.